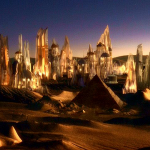 I live in California and like sci-fi since I was young and could stay up to watch them at night. I started with Star Trek: Next Generation and moved onto Deep Space 9 when they spun off. DS9 really won me over as they addressed more reality instead of the a utopian world.

My favorite DS9 episode of all time is In the Pale Moonlight. It dealt with the fact that even good honest men would cheat, lie, and murder if the stakes were high enough. Not that anything really justifies any of them, but it is a simple fact that it happens in our world. Especially with all the dishonest men in power. It also challenges all of us to stay by our Godly morales even in difficult times.

After that I moved onto Babylon 5 and liked how the episodes were all one long continuous story arc. Voyager never really won my heart as they had no story arcs like DS9 and Babylon 5 did but after Species 8472 was unveiled I kind of followed it a bit more. Lastly Enterprise came out and at first I hated the huge step back in the timeline.

But as they did story arcs to patch the holes in the continuity of the Original series and the CGI kind of grew on me. Stargate really didn't interest me too much at first because the movie didn't really explain much of the technology or what the antagonist really were or came about. However with the series the story really unfolded and made it believable, especially the Top Secret hiding of aliens sightings. I liked the idea of myths explained and Ancients. However the story ascension never really caught on with me.

Retrieved from "https://stargate.fandom.com/wiki/User:Tokrakree?oldid=230282"
Community content is available under CC-BY-SA unless otherwise noted.