If this 304 ends up being the sixth one completed and the Sun Tzu the fifth... I just think its strange how they would change their order of completion. Although I guess it's possible in the Alternate timeline, the Sun Tzu could have existed. I just really hate the name Sun Tzu... Although I do like how they named a ship after Hammond... Although I still would have liked a 304 named Phoenix.—Anubis 10545 17:27, 24 December 2008 (UTC)

dude, so do i. sun tzu is a stupid name. dang, i mean comon. they shoulda named it the phoenix and then "The Hammond" not "General Hammond" it just sounds kinda weird—SupremeCommander 20:55, 24 December 2008 (UTC)

There may be facts to be amended once the final version of the episode comes out. Traditionally, a person's rank isn't included in the naming of a vessel, so it could be they reshot this scene and had Amanda (Carter) say "The George Hammond". Who knows. I don't mind the name as is. The best way to have played things out, in my opinion, would have been to not introduce the Sun Tzu at all (though I don't mind that name either, being an Asian man). Rather than introduce a fully functional ship out of nowhere (that apparently came off the production line faster than the Phoenix), they should have finished building the Phoenix and sent that with the Apollo. The Phoenix would be crippled (though not out of the picture entirely, because the Sun Tzu isn't out of the picture yet) then they could have introduced a brand new ship in development, called the "General Hammond" or "George Hammond" or whatever. No renaming, no surprise ships, just the sixth ship in development. As a matter of fact, there's no evidence that the Sun Tzu was a 304, though that is the most likely scenario, they never mention what class ship it is. —Ka'lel 01:14, 25 December 2008 (UTC)

ACTUALLY, come to think of it...In the episode, replace every instance of the word Sun Tzu with the word Phoenix and vice versa and every single problem is solved. The Phoenix exists, has been established, so we care when it's crippled. Then instead of Sheppard asking "Oh, you mean the Phoenix?" it would be "Oh you mean the Sun Tzu?" (Sun Tzu introduced). Samantha: "Actually, it's been renamed the 'General Hammond'." (Sun Tzu renamed). That way, no magically appearing 304s, we care that the Phoenix has been crippled, and the Sun Tzu is the ship that gets renamed. Everyone's happy. —Ka'lel 01:20, 25 December 2008 (UTC)

Given that name I'd say the Sun Tzu is probably a Chinese ship, possibly one we gave them like we were forced to give the Russians (would explain why the Phoenix or General Hammond as its now called wasn't first) as for the name, it was a tribute to Don S Davis who died of a heart attack shortly before Enemy at the Gate was shot.--User:WarGrowlmon18 07:47, 21 January 2009 (UTC)

they called it the george hammond because the actor that played him DIED in real life and he was a loved actor, look at shepperd's face when sam carter said "it's called the general hammond" i think the line was adlibed by her and was not in the script.

did they make a new asgard core and place it on the phoenix/ going to put it on the general hammond? or was it simply moved fromt he odyssey?

Are you sure that the George Hammond is a Daedalus class? The pictures at the bottom of the article seem to point that direction, but the article's main image doesn't look like a 304 very much at all to me. Is it possible that we are dealing with a new class? --Undomesticatedequine69 20:53, 6 August 2009 (UTC)

All those images are from The Last Man. Technically, they're of the Phoenix (which is a 304 based on the dialogue of that episode). However, as shown in the image below, it is in fact a 304. Also, in Enemy at the Gate, Carter states that she will be given command of the next daedalus-class ship, which she states is the General Hammond (changed to George Hammond based on the same image below)—Anubis 10545 21:21, 6 August 2009 (UTC)

I don't know the source for the above image, but as Anubis10545 said above, in EatG, Carter says it's named the General Hammond. NOW, the SGU premiere would seem to indicate the name has changed again, to just the U.S.S. Hammond. When Eli Wallace first arrives, Rush welcomes him to the Hammond. Also and most importantly, Carter's badge reads U.S.S. HAMMOND. 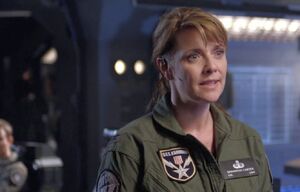 Retrieved from "https://stargate.fandom.com/wiki/Talk:George_Hammond?oldid=106370"
Community content is available under CC-BY-SA unless otherwise noted.