"I'm still trying to understand how you thought it was a good idea to test this device by having someone throw you off a balcony."
―Elizabeth Weir[src]

The Ancient Personal shield emitter, less formally called an invincibility device, is a palm-sized device which projects a protective forcefield over the wearer, shielding them from virtually any kind of direct harm.

The shield emitter must be initialized by the Ancient Technology Activation gene in order to be used. Once active, it need only be placed anywhere on the body to engage the forcefield. While active, the forcefield will diffuse all forms of energy, including energy weapons and kinetic energy from bullets. It also possesses a built-in inertial dampener which will protect the wearer if they fall from a great height. There may be some limits to this, however, as when Dr. Rodney McKay was smashed through a wall by a dragon's tail, he was briefly knocked unconscious despite being physically unhurt. It has an internal power cell which will eventually deplete under strain, and does not appear to be rechargeable once this occurs.

Due to its innate purpose of deflecting solid and liquid objects, the shield can prevent the user from eating or drinking while the device is active if the user is not mentally skilled enough to change its setting. The shield does allow the user to continue breathing regardless of its operational state, but only so long as there's no direct obstruction. Because the shield is skin-tight, the user cannot breathe if their air supply is cut off, such as by drowning; the shield would block the water, but no air would be able to get in.

The shield responds to mental commands, thus requires practice and discipline to use correctly. It can only be deactivated by mental command, and even the user cannot reach the emitter to disconnect it manually. Without proper mental focus, the user's subconscious desires may override their conscious desires, resulting in unwanted behavior from the device. When Dr. Rodney McKay first tested a shield device, he could not remove it due to his subconscious fear of danger, which the shield interpreted as a desire for it to remain active. It deactivated when Dr. Elizabeth Weir presented a scenario in which its continued presence would put Rodney in danger. When McKay used the shield on a mission to Admah, he displayed a much better control over it, shutting it down easily. However, by that point he'd had much more experience with using Ancient technology and the mental components some of their technology requires.

There is apparently two variants of the emitter, one that imprints on the wearer and another that anyone can use once its activated as McKay's wouldn't work for anyone else while Lucius' worked for anyone once activated. (SGA: "Hide and Seek", "McKay and Mrs. Miller", "Irresponsible", "Brimstone")

Dr. Rodney McKay found a shield device in one of Atlantis' research labs. Upon receiving the Ancient Technology Activation gene therapy, he immediately tested it, only to find he could not remove it. While McKay was mortally afraid of dying of dehydration, Dr. Elizabeth Weir correctly surmized that his inability to remove it was a subconscious desire, and eventually tricked him into deactivating it. McKay put it back on to rescue the city from an energy-absorbing Shadow creature feeding on the Stargate's energy. This act drained the shield device of its remaining power. (SGA: "Hide and Seek")

A McKay from an alternate reality, called "Rod," also possessed such a shield; in fact, it was the same one McKay found in the main reality, only Rod had not drained his. Rod used it to cross a Matter bridge constructed by McKay and his sister Jeannie Miller in order to stop their experiment, which was flooding his reality with dangerous exotic particles. Rod's control of the shield emitter was much more advanced than McKay's, able to utilize the shield while just holding it in his hand and turning it on and off at will. Rod was eventually sent back to his reality with the shield protecting him. (SGA: "McKay and Mrs. Miller")

Lucius Lavin possessed one of these devices, which he learned the purpose of after visiting Atlantis. His version could be worn by anyone, rather than imprinting on the first user. Though he did not possess the gene to activate it himself, he eventually stumbled upon someone who did, allowing him to begin using it. He used it to sell himself as a hero to a small town, but as his fame faded he had to hire Genii mercenaries to keep up his image. This backfired when the mercenaries called in Acastus Kolya to apprehend Lt. Colonel John Sheppard, who had come to investigate Lucius' claims. Lucius loaned it to Sheppard so he would be able to defeat the Genii. In doing so, its remaining power was depleted. Once the conflict was resolved, Sheppard returned it to Lucius, failing to mention that it was out of power. Lucius learned this the hard way when he encouraged a local boy to kick him as a test of the shield. (SGA: "Irresponsible")

On a mission to Admah, McKay once more dons the shield he'd depleted defeating the shadow creature. As his teammates are unaware of the shield, they erroneously believe him dead when he's thrown through a wall by a dragon's tail. The shield protects McKay and enables him to help his teammates escape through the Stargate to M3T-842 and then to Atlantis. On Atlantis, McKay shows his shocked teammates the shield he has been wearing all along, stating he'd thought it would come in handy. Unlike the first time, McKay shows a better control over the shield, shutting it down with ease upon his return to Atlantis. (SGA: "Brimstone") 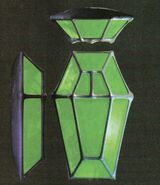 Schematics for the device

Community content is available under CC-BY-SA unless otherwise noted.