Edit
watch 02:07
Spider-Man: No Way Home Trailer Dropped - The Loop
Do you like this video?
Play Sound
< Asia

The People's Republic of China is a large nation-state on Earth located in the eastern portion of the Asian continent.

When Apophis attempted to invade Earth in 1998, the United States was concerned that China would detect the Goa'uld Ha'tak spacecraft. (SG1: "The Serpent's Lair")

It is noted in several instances that China is very uncomfortable with the United States Air Force's unilateral control of the Stargate; more so than any of the other nations involved in the program. In 2006, China supported a Russian demand for the return of the secondary Stargate; however, this turned out to be nothing but leverage to acquire a Daedalus-class battlecruiser. Thus, the Stargate remained in American hands. (SG1: "Crusade")

In ancient times, China was ruled by the Goa'uld Yu. A Tau'ri general named Sun Tzu was alive during this era and wrote the Art of War, a famous book on military strategy. Yu was so fond of Sun Tzu that he made him a member of his Royal Guard and cloned him several times, the final clone acting as his First Prime. (SG1: "Fair Game", "Summit", "Four Dragons")

By 2009, the Chinese Government had been given a Daedalus-class battlecruiser, which they named the Sun Tzu after the Tau'ri general of the same name. (SGA: "Enemy at the Gate") 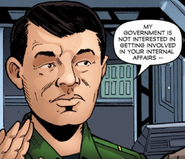