Flanigan was born as Joseph Dunnigan III in Los Angeles, California. His name was changed to Joseph Flanigan when he was adopted by his stepfather, John Flanigan. When he was six years old, his family moved to a small ranch near Reno, Nevada, although his stepfather objected to his ranch being called a "small" farm. Joe responds, "The trouble is, it is a small farm." However it is a somewhat mis-characterization of his stepfather who was vice president and board member of Annheiser-Busch Inc.

From the age of 14 Flanigan attended a boarding school in Ojai, California where he appeared in the school's production of A Streetcar Named Desire. He later earned a history degree at the University of Colorado where he was a world-class skier and appeared in Coriolanus. He took acting to overcome his shyness and never planned on an acting career. He spent a year studying at the Sorbonne in Paris as part of the Junior Year Abroad program and is fluent enough to joke around with French reporters in French.

After graduation, he pursued a writing career. He worked on Capitol Hill and then briefly for several New York City publications, including Town & Country and Interview magazine. On the advice of some of his friends, he studied at the Neighborhood Playhouse, was coached by Gerald Gordon, and then moved to Los Angeles in 1994 to pursue an acting career.

Flanigan had guest roles in numerous television series including Profiler, First Monday, and Sisters, until he got his breakthrough with his role on Stargate: Atlantis as Lt. Colonel John Sheppard, the military leader of the Atlantis Expedition. During the filming of Atlantis, he lived weekdays in Vancouver, Canada, where the series was filmed. On weekends, he would fly to Los Angeles, California where his wife and children reside. He continues to write, creating the stories for the second season episode "Epiphany" and the fourth season "Outcast".

In September 2007 scifi.com's SciFi Wire service reported that, "Talent agency UTA filed suit on Sept. 24 against Stargate Atlantis star Joe Flanigan in Los Angeles Superior Court, claiming that the actor owes $99,225 in commissions, according to The Hollywood Reporter; Flanigan's manager, John Carrabino, told the trade paper about the lawsuit: 'I had no idea they did this. This is the first time I'm hearing about this.'" UTA filed a similar lawsuit against actor Wesley Snipes who was equally surprised.

Flanigan had been married to Katherine Kousi, an actress/painter, from 1996 to 2013. They have three sons, Aidan, Truman, and Fergus.

An avid outdoorsman, Joe Flanigan enjoys downhill skiing, skate-boarding, surfing, rock climbing, and mountain climbing. He took two prizes in the Waterkeepers' Alliance downhill ski competition at Lake Louise in January 2006, an event fellow Stargate lead Richard Dean Anderson has attended as well. However, Joe explains that he decided to stop mountain climbing after he froze his cornea on Mount Rainier. He said at a convention that he realized as a father, "it was irresponsible of me to take those kinds of risks." 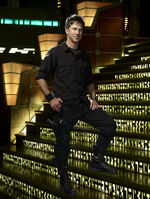 John Sheppard from Alternate timelines
(SGA: "Before I Sleep")