While in the service of the Goa'uld System Lords, the Jaffa guards often wore helmets or masks that hid their features and intimidated the System Lord's human slaves. The masks were typically modeled after an animal associated with the particular Goa'uld the Jaffa served; for example, Apophis's Serpent Guards wore cobra masks while Ra's Horus Guards wore falcon masks. The more complicated helmets (such as Horus helmets) could be retracted into the body armor of the Jaffa, or taken off the armor completely, while simpler masks (such as Serpent helmets) simply opened to expose the Jaffa's face. On occasion, System Lords themselves would wear more ornate versions of Jaffa masks to deceive their human slaves (Ra in particular was well known for his opulent mask), or on the (rare) occasion where they would personally join their Jaffa in battle. Usually masked Jaffa were seen directing unmasked Jaffa. This could indicate the masks are also a level of authority, like that of a Sergeant over that of a regular soldier. (Stargate) (SG1: "Children of the Gods", "Thor's Chariot", "Seth", "Jolinar's Memories") 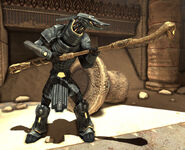 Horus Guard helmet.
Add a photo to this gallery

Ra in a Pharaonic mask
Add a photo to this gallery
Retrieved from "https://stargate.fandom.com/wiki/Jaffa_helmet?oldid=367754"
Community content is available under CC-BY-SA unless otherwise noted.