"Most Wraith seek to be ruled. They fear being without a Queen."
―Todd[src]

Hive queens are Wraith females who hold a great deal of power within their society and are at the top of their hierarchy. They can produce Wraith warriors. When one queen wishes to annex the powers of another, she usually assassinates her personally. Most queens are quite arrogant and refuse to meet in diplomatic relations with Wraith hives that do not have another queen. They are assisted in their duties by Wraith Commanders. (SGA: "Spoils of War", "The Queen")

Wraith queens control Hive ships and rule their subjects with great strength with none daring to go against them in any decision. They typically reside in special throne rooms on their vessels where they command the culling of worlds or engage in battles. Hive queens are expected never to show any weakness, and if a queen is assassinated by a rival queen, her followers will accept the new one if she appears strong enough. (SGA: "The Hive", "No Man's Land", "Spoils of War", "The Queen")

They were typically guarded by a number of Wraith warriors and sometimes would be tended to by Wraith worshippers. (SGA: "The Hive")

Wraith Queens possess incredible mental powers and as such, are capable of making their subjects kneel, usually by force or at will. They can use this to force someone to give them information they desire, though those with particularly strong minds such as Lt. Colonel John Sheppard can resist this.

When a Queen boards another Queen's hive uninvited, its a direct challenge as old as the Wraith themselves. A Queen typically answers by going to face the enemy Queen personally for a mental duel. This is referred to as solving the matter "Queen to Queen". (Stargate Atlantis: Inheritors)

The concept of a 'queen' in Wraith culture is so ingrained that they have viewed the Atlantis expedition in a similar light, regarding Doctor Elizabeth Weir, Colonel Samantha Carter and Teyla Emmagan as the 'Queens' of Atlantis, with Sheppard as their consort (and General O'Neill as Carter's 'primary' consort while Sheppard just manages Carter's responsibilities in Atlantis), with Richard P. Woolsey as one of Carter's blades who took over her responsibilities after the destruction of Asuras. 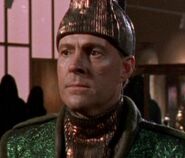 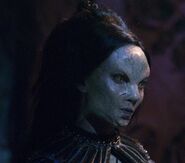