The Gamma Site was an offworld outpost and research facility operated by Stargate Command and located on a planet some 24,000 light years from Earth. This planet was chosen for several reasons, one being its unique radioactive ionosphere which made beaming difficult.

Under the command of Colonel Stewart Pearson, the Gamma Site hosted more than 30 scientists working on several projects. Though it included a small surface facility that included an F-302 fighter-interceptor hangar and control tower, the bulk of the facility was subterranean, much like Stargate Command's main facility under Cheyenne Mountain. A small research station was also constructed, some ten kilometers away from the base, though it was not always manned.

The Gamma Site was chosen as the destination for a tour of delegates from the International Oversight Advisory, as a demonstration of the work being as part of the Stargate Program. During this tour, a species of insect known as R-75 managed to breach containment and eventually overrun the facility. The base's self-destruct was triggered, and Major General Henry Landry initiated Protocol CR-91, dispatching the Odyssey to deliver a payload of toxin to kill R-75. (SG1: "The Scourge")

A second Gamma Site was later constructed, and was used to relay a message to Teal'c during his efforts to disable the Ori Supergate, so as to warn the Odyssey of the threat of an approaching Wraith Hive ship. This facility may well have been located on another planet, however. (SG1: "The Pegasus Project") 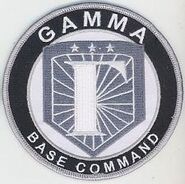