Dominick DeLuise (born August 1, 1933 - May 4, 2009) was an American actor, voice actor, comedian, director, producer, chef and author and the father of Stargate SG-1 actors Peter DeLuise, Michael DeLuise, and David DeLuise. He was best known for his role in The Cannonball Run films. He also starred in a number of movies directed by Mel Brooks, in a series of films with career-long best friend Burt Reynolds, and as a voice actor in various animated films by Don Bluth.

DeLuise died of kidney failure on May 4, 2009, at Saint John's Health Center in Santa Monica, California at age 75. He had been battling cancer for more than a year prior to his death. 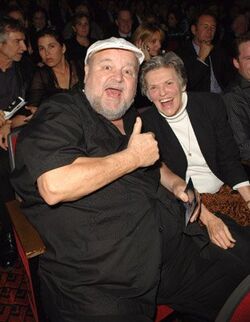 Dom and his wife Carol Arthur.

Togar
(SG1: "Urgo")
Add a photo to this gallery

Retrieved from "https://stargate.fandom.com/wiki/Dom_DeLuise?oldid=391301"
Community content is available under CC-BY-SA unless otherwise noted.