Dakh was a male Karran, and a member of the human population of Karra.

In 2004, Dakh was selected as one of five Honored Ones for the Wraithfall ceremony, along with Vash, Arno and two others, when the Atlantis expedition visited their planet. After he had received his holy medallion of Karra he would have been culled by a Wraith Dart, however Major John Sheppard intervened against his wishes and was taken to Atlantis, where he spoke about the ceremony. (SGA: "Wraithfall 1")

Even though he wished to return to his planet and continue the ritual, Dr. Elizabeth Weir was reluctant to make a decision in regards to letting him leave. Eventually, while touring the city, he attacked Dr. Radek Zelenka and broke the Naquadah generator that powered the Stargate, to make sure he wasn't followed, then made his way through the stargate back to Karra. (SGA: "Wraithfall 2")

He was then taken to the neighboring planet, Vohl, where he was placed in the experimental laboratory to be tortured and fed upon by the Wraith.

Major Sheppard managed to take him back to Atlantis, but Darh didn't approve. He criticized him, blaming Sheppard for the possible destruction of his people, and for interfering and mocking their culture. He died in the infirmary.

Afterwards, Dr. Rodney McKay and Teyla Emmagan brought his body back to his people. (SGA: "Wraithfall 3")

Dakh presenting himself and his medalion to the Wraith, during Sheppard's hallucinations

Dakh offering himself to the Wraith

Dakh after the ritual with Sheppard 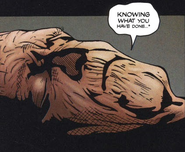 Dakh's death
Add a photo to this gallery
Retrieved from "https://stargate.fandom.com/wiki/Dakh?oldid=377401"
Community content is available under CC-BY-SA unless otherwise noted.