Start a Wiki
watch 01:48
The Loop (TV)
Do you like this video?
< Wraith technology

The Cerebral Cortex Conduit is an experimental device developed on the planet Vohl by the Wraith, for the purpose of giving them new ways to prepare and consume the life force of other beings, as well as probing the minds of their prey.

The Cerebral Cortex Conduit probes a subject's brain for information, as well as causes hallucinations. While this happens, the device drains the subject's blood in small controlled amounts.

In 2004, the Wraith brought Major John Sheppard into their Experimental laboratory on Vohl, and used their Cerebral Cortex Conduit on him in an attempt to learn the location of Earth.

While under the machines effects, hallucinations taunted him in regards to his meddling with other races and the devastation brought upon them. He also relived the death of Colonel Marshall Sumner at the feeding hand of the Wraith Keeper. (SGA: "Wraithfall 2")

He was later rescued and removed from the device by Lieutenant Aiden Ford and Teyla Emmagan. (SGA: "Wraithfall 3") 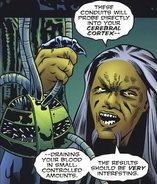 The cerebral cortex conduit interfaced with Major Sheppard
Add a photo to this gallery
Retrieved from "https://stargate.fandom.com/wiki/Cerebral_Cortex_Conduit?oldid=372905"
Community content is available under CC-BY-SA unless otherwise noted.