Edit
watch 01:33
Wiki Targeted (Entertainment)
Do you like this video?
Play Sound

Andee Frizzell is an actress. Her most notable appearances have been as several adult female Wraith on Stargate Atlantis, the Keeper in the pilot episode of the spin-off, the Hive Queen in Season Two's The Hive and as Michael's Hive Queen in the Season 2 finale, Allies (Part 1). She also played a role in a TV episode of Gene Roddenberry's Andromeda alongside SG-1's Christopher Judge, as a High Guard AI. 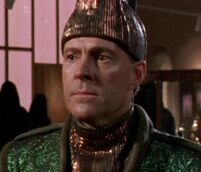