Hey again, everyone! For those who don't know me, I'm Kylara, your Fandom Wiki Representative. The new wiki skin FandomDesktop will be rolling out this summer and I want to make sure you're all informed and ready. Discussions will be very similar, but the rest of the wiki on desktop will have a new look and feel. 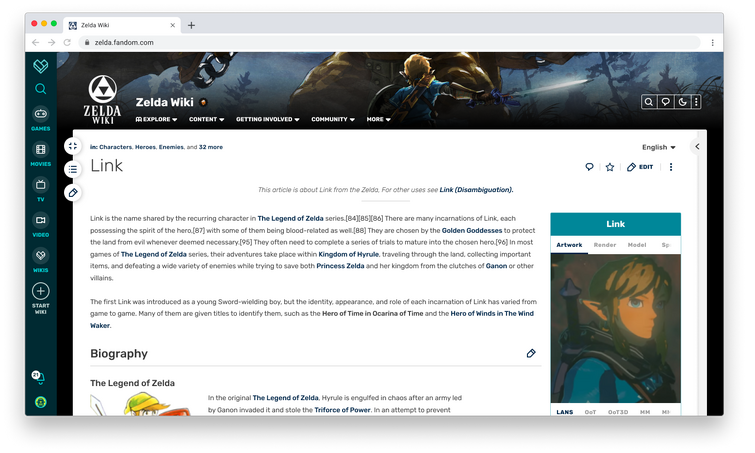 To keep up to date on the upcoming changes to the skin design, here are links to informative staff blog posts and some highlights:

There's a lot of big changes! Personally I'm very happy with several of these features, such as the wider width, the top navigation sticking to the top of the page as you scroll down, and the table of contents icon. 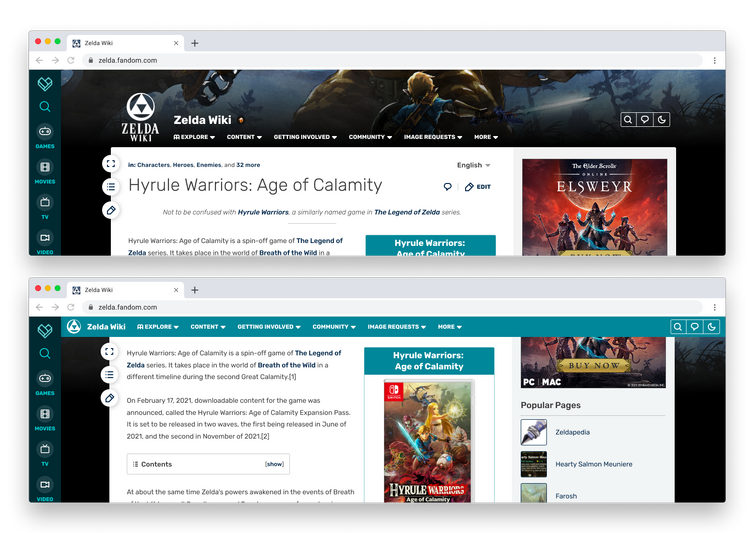 Keep an eye out for future staff blogs for additional announcements about the new skin and rollout.

Fandom is undertaking a two-week quality-of-life bug fixing project! This work will focus on bugs which haven’t risen to critical fix levels, like features not quite working the way they’re intended or the way they used to on the legacy platform. You can read more about it in this staff blog.

I’m reaching out to see if you have any particular bugs that are really annoying, even if they're not site-breaking and may have not been reported yet. We have an opportunity to get bugs like that triaged and incorporated into this project. So if you've got a bug like that, please respond with the following to help us work on these issues, so I can make sure the issues get ticketed:

Please note this is for bugs, rather than content issues on the wiki.

This is your opportunity to get a quick fix to everyday annoyances while the teams are in full bug squashing mode, so let me know quickly!

Cliff Simon, the actor for Ba'al, has died on Tuesday, March 9th 2021 in a tragic kiteboarding accident at Topanga Beach, California. He played the character Ba'al in the Stargate franchise who was one of the most iconic Goa'uld System Lords in later seasons. Gateworld has confirmed his death as has his family in a Facebook post. He was an amazing actor and person. My deepest condolences to his family and friends in this time and the Stargate community will deeply mourn his loss. 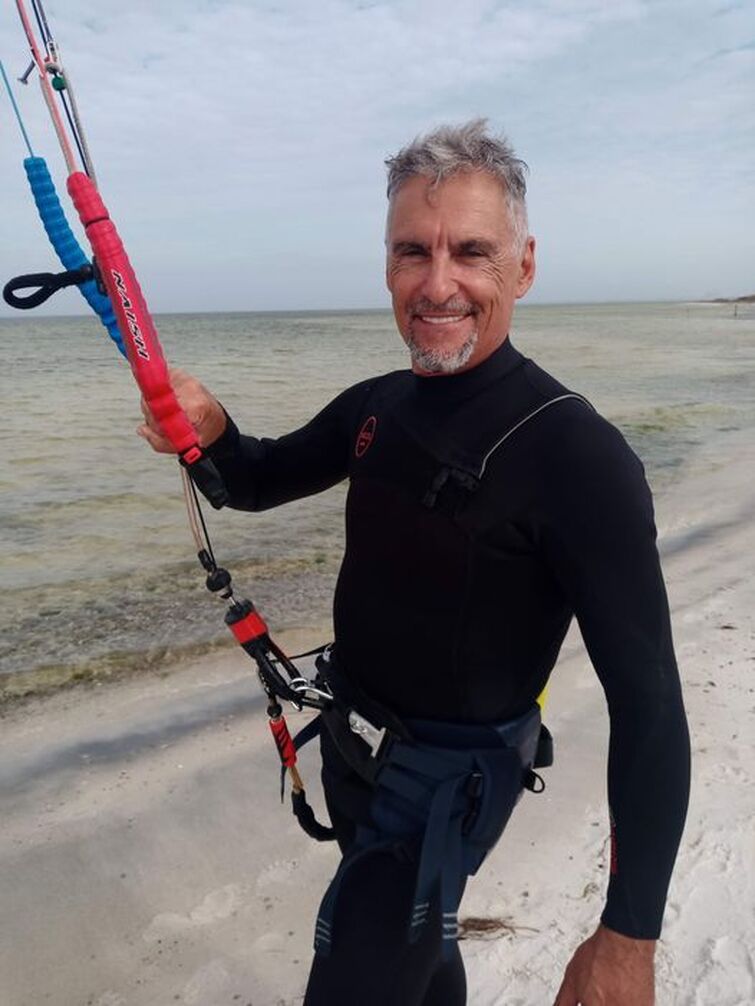 Stargate Actor Cliff Simon Has Passed Away At Age 58 » GateWorldGateWorld

(edited by Dragonfly82)
this would make a great series. travel through super gates to free people from the Ori or something
(edited by A Fandom user)

Apparently there's going to be an announcement at SDCC on July 20th, according to stargate.mgm.com. Nothing major on the website, all you can do for now is sign up to get an e-mail alert "when we activate the Stargate", as the site puts it.

There are a few possbilities of what the announcement is:

6) A Stargate game (either mobile or console/PC)

Could Time Travel bcame reality? Go and read this.

I would like to invite all fans of science fiction to collaborate on the new wikia http://spaceships.wikia.com

It is a wikia about fictional spaceships created a couple of days ago. It would be very helpful if anyone with a thing for spacecraft could contribute even just a little.

I am not an admin or been editing long on this wikia but anyone who may want to help develop the wika, liked the film or just wants to check out what there so far then please feel free to help out this wikia. Many thanks!

I am not really sure how editing wikia work, and I don't really want to (to be honest). I also don't know if this is posted in the correct place to post this. But technically it's news. There will be a TL;DR version at the bottom of this if you don't care or want to read all of this.

Anyway, unless there is a way to edit several character templates simultaneously, then that is catastrophically funny. I know its funny. I laughed. I showed my friends, they laughed too.

So funny in fact, that I have to make this thread because it's just so funny. And by funny, I mean not at all. Kind of sad. Well, it would be funny if someone stated it was a joke. But sadly, this is not a joke.

The easiest way to present the Gao'uld gender expression accurately would be to list the gender of the Gao'uld and the pronouns they go by separately. For example something like this but more accurately styled to fit the wiki: http://i.imgur.com/XJ9JZJW.png (screenshot from http://steven-universe.wikia.com/wiki/Garnet)

Asexual isn't a gender and all my friends and I laughed. It should also be changed so it's not inherently incorrect. But I don't know how to do it several pages are locked which actually forbids me to edit them and the most important thing being that I simply don't want to edit them. I am busy.

(edited by A Fandom user)

Hey guys, I just wanted to let you know that there's an upcoming auction August 1st and 2nd, that will be auctioning off actual props from Stargate. You can bid online, or if you're in Vegas, come on down to the showroom! http://morphyauctions.hibid.com/catalog/61079/august-1-and-2-antiques--advertising-and-movie-props-las-vegas?cat=0&sort=1&hide=0&qs=0&view=0&aView=0&q=stargate&selCat=0

Just saw Edmonton expo video. Joe Flanigan had made attempts at agreements to buy/ lease the franchise before and after MGM's bankruptcy so he could make the series again instead of a movie. In my opinion, I hope in the end they'll come back and agree with him. I know it's probably unlikely at this point with everything we've been hearing about the reboot coming soon. However I like his idea of making a series again instead of a reboot movie, especially with Flanigan at the helm. Sheppard knows what he's doing. ;) Just thought some people might find this interesting like I do.

MGM announced today (May 29, 2014) that it will produce a new Stargate feature film trilogy, along with partner Warner Bros, with a possible release date around 2016. Heading up the films will be original writer-producer Dean Devlin and director Roland Emmerich, who brought the concept to life with 1994′s Stargate.

The new trilogy will not be associated with the long-established canons of Stargate SG-1, Atlantis, Universe, or the original feature film, but will instead act as a Reboot of the franchise.

Big day for reboots. First it was Cliffhanger, and now MGM andWarner Bros.announced they are teaming with Roland Emmerich and Dean Devlin to create a re-imagined trilogy based on the sci-fi hit Stargate, one of the biggest titles in the MGM library. Emmerich, who directed and co-wrote the original film with Devlin, is on board to direct this one, with Devlin producing. Those two are already hard at work on a new version of Independence Day at Fox.

MGM’s Gary Barber called Emmerich and Devlin “world-class creators of the original Stargate,” and said they will “bring their reinvigorated vision of this wildly popular property to audiences of multiple generations.”

Said Emmerich and Devlin: “The Stargateuniverse is one that we missed terribly, and we cannot wait to get going on imagining new adventures and situations for the trilogy. This story is very close to our hearts, and getting the chance to revisit this world is in many ways like a long lost child that has found its way back home.” MGM’s Jonathan Glickman will oversee it with Warner Bros’ Greg Silverman. Warners will distribute with MGM handling some international territories. Back in its day, Stargate set the record for highest October gross and did near $200 million in global ticket sales. It went on to have a very successful run as a syndicated TV series.

Greetings comrades. This is your pal Anubis 10545. The Blogs and Forum features are now activated on Stargate wiki... as is probably obvious given the existence of this post. Thanks to User:Jiskran for pointing out that it's probably about time we started using those features.

Um, so I guess that's about it.